Nice looking cardboard box, but no film inside !!

I guess these little 10 foot 9.5mm film clips were not titled and seem to be short extracts from Pathéscope 9.5mm releases. So it figures they must have beeen produced by Pathéscope Ltd. for Construments Ltd. Currently non of these little shorts have appeared, so we must wait for more information until some turn up. .

Luckily, thanks to a lucky find by 9.5mm film historian Maurice Trace in 2015, we now have an actual box but infuriatingly - no film yet!

Although it is pretty obvious that Pathéscope printed these short 10 foot extracts for use with "Ray" toy 9.5mm projectors, the titles were never mentioned in Pathéscope sales literature or the Pathéscope Monthly magazine. No doubt they were destined just for toy shops.

My own theory about these little rolls of 9.5mm printed films, is that Construments just bought a full '1 reel' 300 foot / 100 metre release like "Prowlers of the Prairie", then just cut all the 15 foot / 5 metre extracts in order from the print. So a 300 foot / 100 metre 9.5mm print would yield about 20 'extracts'. So Pathéscope themselves were not involved. 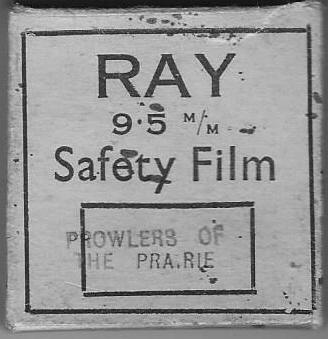 Thanks to 9.5mm film historian Maurice Trace, a 15 foot / 5 metre 'Ray' printed film has also turned up - amazing what is still lurking out there to find!

I have listed educated guesses as to each film's origin, but I would be pleased to have any additions/comments/corrections.

I would love to hear of any other titles in this series, and purchase titles not in my collection.
Grahame Newnham:- presto @ pathefilm.uk (remove spaces for correct e-mail address)